Tesco’s Virtual Stores in South Korea, a new Invention of the Retail Industry 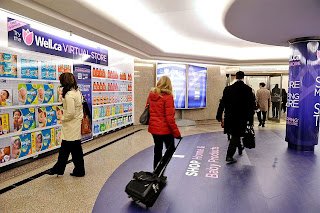 Tesco Homeplus in South Korea has opened the world’s first virtual store today in the Seoul subway to help time-pressed commuters shop on the go using their smart phones.

The walls of the Seonreung subway station in down town Seoul came to life today with virtual displays of over 500 of the most popular products by pasting posters of stocked shelves onto platform walls with QR coads and turned the place into a 'virtual supermarket' through which customers can scan the barcode and shop by using the Homeplus app on their smartphones and The contents of the shoppers' ­'virtual baskets' were later ­delivered to their homes. 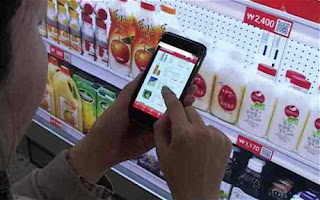 The main importance of the idea is that busy commuters can scan their groceries on their way to work in the morning and, as long as their order is placed before 13.00, their items will be delivered home that same evening, creating even greater speed and convenience in the whole shopping experience.

The displays, which include a range of different daily items from milk and apples to pet food and stationery, will be placed on the pillars and the screen doors at the subway station. Commuters turned shoppers can then scan the QR code beneath the desired item via the Homeplus app on their smartphone and the item will then be delivered direct to the customer’s home at a time of their choosing.

In the words of Executive Vice President of Corporate Affairs at Tesco Homeplus, D W Seol ,

“I am extremely proud of the great work the Tesco Homeplus team have done to launch this idea in the Seoul subway. We are always looking to make the shopping experience easier and more convenient for our customers and the introduction of the virtual store is a great achievement. This is a real triumph for the Korean retailing industry as it continues to be at the forefront of technological innovation.” 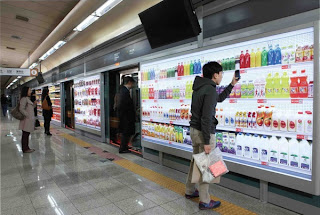 The trial was a great success story, Tesco Homeplus is now expanding its virtual stores, to 20 bus stops in Seoul. with a view to rolling the format out across South Korea within two years. "The concept made sense," said Irene Lam, a spokeswoman for Cheil Worldwide, the global marketing agency that helped develop the store. The trial boosted the retailer's online sales 130% and online members 76%, claimed Cheil.

The smartphone app is the most popular shopping app in Korea, with more than 900,000 downloads since it launched in April last year. 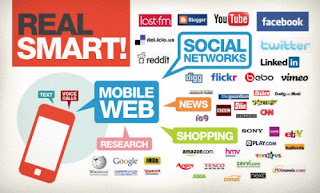 The concept can next be applied in UK, according to experts. "The time is right for this," said Simon Goodall, director of strategy at Saatchi & Saatchi X. "This is about bringing the store to the people."

To be successful in the UK, two vital pieces of infrastructure would be required: mobile connectivity on all forms of public transport, including the tube networks in London and other cities, and a fleet of delivery vans set up for fast reactions. 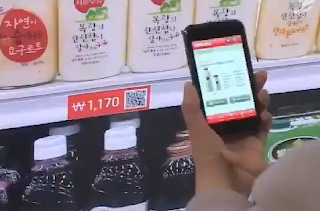 Most of the big supermarkets in the UK have mobile-optimised websites for online shopping and Ocado’s iPhone app has won several awards, but Home Plus’s subway poster shops pushed the idea of mobile shopping into the minds of people who could use it right where they are.

This concept of the virtual store has created a kind of wave in retail industry. Some other retailers are on their way to grab their share of the success, like Yihaodian , China's leading online grocery store, introduced “virtual supermarkets" to Shanghai's metro stations earlier this week. Large LED screens advertising everything, from diapers to raw meat, have been posted at nine metro lines across the city.

So let’s revise what are the key benefits here : 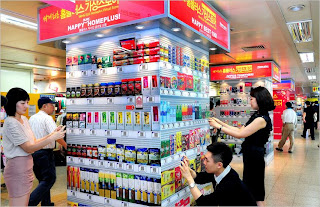 But, for in the opinion of some people it’s not all the bed of rose. Some difficulties can also be seen here :-

Whether we see these virtual stores as a display advertising campaign or a new way of building supermarkets in spaces that already exist, that are a remarkable achievement.